The Heart of the Matter

I first discovered the romance genre in the book aisle of a K-Mart, within weeks after my arrival in the United States.  I was thirteen, a voracious reader all my life, albeit up to that point only in the Chinese language, so of course I had read my share of romantic fiction, but never anything with such provocative covers!

It was the late eighties, and the heaving-bosom clinch was still very much in vogue.  I am almost certain that when I picked up my first one, I was half-hoping for the content inside to be outright erotica, which would have been a totally novel, forbidden experience for me. 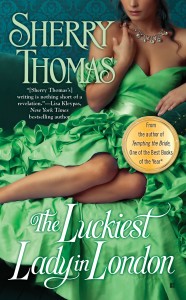 But soon I was sucked in.  At fourteen I walked three miles to the nearest Wal-Mart to buy Sweet, Savage Love by Rosemary Rogers.  (It was a testament to historical romance’s enormous popularity then that a sixteen-year-old book was still available at Wal-Mart.) I would regularly haul back bags of romances home from the public library.  And during summer holidays, because I lived on the campus of a university—Mom was a grad student then—I would ride my bicycle to the university bookstore and sit in the romance aisle for hours every day, hoping to come across that next take-my-breath-away read.

As the years flew by, my love of romance turned into a career.

In the beginning, I wrote romance because it was what I loved to read.  Why wouldn’t I want to create fun banter, hot sexual tension, and happy endings?  As I waded deeper into the creation of what I had formerly only consumed, however, the true reason why I love it so much dawned on me.

Other genres offer their own satisfying endings:  Science fiction saves the world from disaster, fantasy completes epic quests, and mystery is wrongdoing uncovered and justice served.  But romance, more than any other genre, goes directly to the heart of the matter and declares that happiness is not only possible, but achievable in the here and now.

And it does so by taking the hero and the heroine on a journey of transformation.  There will be pain, there will be setbacks, there will be pasts that seem too terrible to escape and flaws that seem too ingrained to overcome.  But at some point, in the hands of a great author, these characters rise from the ashes of their fear and their mistakes.  They now understand what it means to make good choices; and they do make those good choices, even if—heck, particularly if—it is the toughest thing they’ve ever done.

It is the most life-affirming message one could find anywhere.  And that’s why romance matters.

Megan Whalen Turner, author of the Queen’s Thief series.  The series begins as a fairly straightforward YA fantasy, but by book 2 turns into one of the most jawdroppingly unusual and affecting romances I’ve ever read.

Also try, Bettie Sharpe, an e-published author.  Try her novella EMBER.  If you don’t mind a bit of rough language, it will be the best $.99 you’ve ever spent.

To answer this question, I went on a tour of my house, and what should I see but a naked twin mattress leaning against the wall in our guest bedroom?

My husband, who loves to be prepared, had not wanted to part with the trundle part of a trundle bed when we moved from our old house. He figured we always needed an extra bed when the whole family got together.  But the problem?  We already have a queen bed in each bedroom.  So the trundle itself is in the laundry room and the twin mattress is permanently part of the decor in the guest room!

It would be called One Boring Movie, as very little drama happens in my life and I couldn’t be happier about it.  For kicks, Fan Bingbing to play me.

My husband, who is the least craft-y person around, made me a flower out of old Christmas wrapping paper for our first valentine.  It was ugly and I loved it.  Unfortunately we lost it during our first move, many years ago.

My favorite of my own romances is NOT QUITE A HUSBAND, so Leo and Bryony.  And the scene would be the scene in their old house, toward the end of the book.

And since that scene is inspired by the globe scene in Meredith Duran’s THE DUKE OF SHADOWS, that would be my general recommendation.

Sherry is generously donating one copy of Tempting the Bride to give away internationally (enter here) and a copy to U.S. readers. To enter the domestic contest, either leave a comment here or enter the weekly drawing on the contest page. Or both.  (Only one entry per commenter per post, though – multiple comments on one essay does not give you more chances.)  Comment entries must be posted by midnight EST Aug 8 to be eligible, though winners will be announced the following week.

Sherry Thomas is one of the most acclaimed romance authors working today. Her books regularly receive starred reviews from trade publications and are frequently found on best-of-the-year lists. She is also a two-time winner of Romance Writers of America’s prestigious RITA® Award.  English is Sherry’s second language—she has come a long way from the days when she made her laborious way through Rosemary Roger’s Sweet Savage Love with an English-Chinese dictionary. She enjoys digging down to the emotional core of stories. And when she is not writing, she thinks about the zen and zaniness of her profession, plays computer games with her sons, and reads as many fabulous books as she can find.

Sherry’s next book, THE BURNING SKY, volume one of her young adult fantasy trilogy, will be available fall 2013.

Find Sherry’s and other books at Amazon