I Do Love Romance – Here’s Why

Let me tell you why I love romance books:

When I was thirteen and shy and didn’t know anything about life yet, I discovered Kathleen Woodiwiss’s The Wolf and the Dove on my best friend’s mother’s bedside table and that book—oh, my goodness!—that book had adventure and longing and eeevil bad guys and war and history and a heroine trying to live and find happiness when everything had been taken from her, and the emotions made me breathless and kept me coming back to sneak-read chapters for months afterwards. 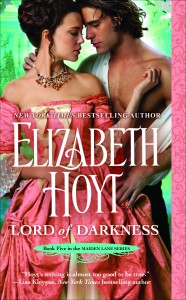 When I was sixteen and surly and no one understood me and it seemed like I would never be happy, I read a book by Carole Mortimer in which the hero had hair that brushed his collar—signifying that he was a dangerous rebel—and he was so mean to the heroine, but then when she left him, he was so distraught that he stopped eating and lost weight and I read the book three times in one sitting.

When I was in college and reading texts on soil science (!) and really, really needed a break from studying, my roommate bought Jennifer Blake’s Royale Seduction, which involved a European prince kidnapping the wrong woman in Louisiana and questioning her with the well known feather torture technique, and we both read it over and over again until the cover literally fell off.

When I was in my early thirties and mother to a baby and a toddler and my husband had lost his job and we had no health insurance, I went to the library and discovered Amanda Quick’s Mistress which involved a woman pretending to be the mistress of a dark, brooding, incredibly sexy lord-with-a-past, and for a short time all my worries disappeared. I read the library’s entire collection of Amanda Quick in less than a week.

When I was in my late thirties and my mother was dying in a coma for a month, I sat by her bedside in the Intensive Care Unit and read Elizabeth Lowell’s Jade Island for the second time, and while that wonderful book didn’t make the situation any better, it did help me pass the long, inevitable hours.

And now? Now when my career has shot to heights I’d never dreamed of, now that Mr. Hoyt has a job he loves, now that my children are healthy and happy and I live in a lovely old house with way too many dogs and I’m so very happy? Why do I read romance now?

Let me tell you why.

I read romance because I believe there is more to humanity than eating and sleeping and work. There is the spirit and the imagination and they must be fed in order that they not whither and die. There is adventure and humor and love and when I read romance books I remember the best there is of life and people and I close the book with a smile on my face and joy in my heart.

That is why I love romance books.

Recommendations:
My newest reading discovery is Kristen Callihan. Her Victorian London is mysterious, weird, and exciting. Her heroines are kick-ass, her heroes dreamy and forbidding at the same time, and the romance singes the pages. Readers can check out my Book of the Month  page for more books I read and loved. 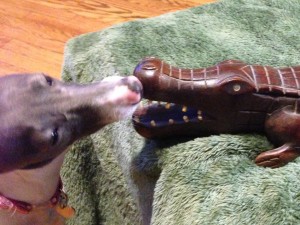 This is a hard one as Mr. Hoyt is a collector *cough*hoarder*cough* of very odd things. My favorite is a carved wooden crocodile that Mr. Hoyt’s aunt brought back from Egypt in the late 1930s.

LUCK AND PERSEVERANCE. I feel that Scarlett Johansson would be a good choice to play me. Others may disagree. 😉

My sister once overnighted me two jars of pickled herring–one each of sour cream AND white wine–on dry ice. Best. Birthday. Gift. EVER.

I like the “artichoke” scene between Mickey and Silence in SCANDALOUS DESIRES. Read the Excerpt

Any picks for romance novels in general?

There’s a scene in Christina Dodd’s A WELL-FAVORED GENTLEMAN that readers either love or loathe. It’s the first sex scene and the heroine is crying and the hero is thrilled because he’s made her feel emotion–made her express emotion–when she’s deliberately cut herself off from life. If I could ever write a scene that good I’d die happy. 😉  (~Did you see Christina Dodd’s excellent post on why romance matters? You can read it here.)

Elizabeth is generously donating four  domestic and one  international copies of Lord of Darkness. International contest submissions enter here. To enter the domestic contest, either leave a comment here or enter the weekly drawing on the contest page. Or both.  (Only one entry per commenter per post, though – multiple comments on one essay does not give you more chances.)  Comment entries must be posted by midnight EST Aug 12 to be eligible, though winners will be announced the following week. 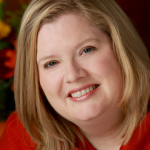 Elizabeth Hoyt is a New York Times, USA Today and Publishers Weekly bestselling author of historical romance, including reader favorite, The Raven Prince. She also writes deliciously fun contemporary romance under the name Julia Harper. Born in New Orleans, but raised in the frigid winters of Saint Paul, Minnesota, Elizabeth was fortunate to travel extensively when she was growing up and lived in St. Andrews, Scotland; Oxford England; and Kawasaki, Japan. She went to the University of Wisconsin, Madison, where she not only earned a degree in anthropology but also met Mr. Hoyt. Some years later, after a short pause to birth and raise two children, Elizabeth realized that she really wasn?t qualified to do anything but Make up Stories and started writing.

Elizabeth now lives in central Illinois with a bevy of untrained canines, a garden in constant need of weeding, and, of course, Mr. Hoyt. Please visit her website, www.ElizabethHoyt.com for contests, book excerpts, news, and Sidetracked Research Articles.

Silence looked at him thoughtfully for a moment and then down at her untouched artichoke. “What is this thing?”

“Is that what it’s called?” She stared disapprovingly down at the vegetable. “I’ve never seen the like. It looks like a giant flower bud.”

“Well, ’tis—or so I’m told.” He gently took the fork from her fingers and picked up her knife, beginning to pry apart the dark green leaves. “They’re grown far away in Italy. A sea captain gave me a crate o’ the things some years ago.”

“Gave?” She raised her eyebrows suspiciously.

He shrugged and flashed her a sly smile. “Gave, took, does it matter, love? To be sure the captain hadn’t much choice, but the result was the same: a case o’ artichokes ended up in me care and I’ve had a fondness for them ever since.”

“Humph.” She peered down suspiciously as he parted the leaves to reveal the choke. “That doesn’t look very tasty.”

“That’s because it isn’t,” he said. “Pay heed: the artichoke is a shy vegetable. She covers herself in spine-tipped leaves that must be carefully peeled away, and underneath shields her treasure with a barricade o’ soft needles. They must be tenderly, but firmly, scraped aside. Ye must be bold, for if yer not, she’ll never reveal her soft heart.”

He finished cutting away the thistles and placed the small, tender heart on the center of her plate.

She wrinkled her nose. “That’s it? But it’s so small.”

“Ah, and d’ye judge a thing solely upon size alone?”

She made a choking sound.

He paused, the knife and fork still in the air. “Now what is it yer thinkin’ about in that prim little mind?”

She shook her head mutely and pointed at the artichoke heart. “Go on?”

“Hmm.” He took bit of soft butter and spread it over the little heart. “Well, I was thinkin’ that sometimes the smaller the treasure, the sweeter the pleasure.”

He cut the heart in half and held it out to her on the tip of the fork and found he was holding his breath. Would she let him feed her? Let him care for her?

She stared suspiciously for a long moment before accepting the morsel into her mouth. His heart leaped in triumph. He watched as the taste in her mouth was reflected in her bright eyes.

“So delicate, so buttery,” he crooned to this fascinating woman. “Green and rich and smooth, but with a tiny bitter taste on top as if to keep yer interest.”

She swallowed and licked her lips. “It’s rather good.”

He laughed breathlessly. Have care, part of his brain whispered. This way only leads to pain. But his cock was pressing hard against the placket of his breeches and he wanted to take her hand and draw her away to his rooms and keep her there until she learned to scream in pleasure.

Until she screamed his name and no other.

“Yes, rather good,” he imitated her tones gently. “Well worth the trouble o’ the thorns and the prickles to reach that sweet, meltin’ center, I think.”