First, let me start by saying how thrilled I am to take part in the first ever Read-A-Romance Month! I’m happy to talk about some of the things that have inspired me to write contemporary romance, so let’s get right down to it.

Well, okay, maybe not necessarily Mr. Darcy and Cary Grant per se (although back in their days, a girl certainly wouldn’t have thrown either man out of bed for eating crackers), but rather the films of Cary Grant and others of that genre, as well as Jane Austen’s Pride & Prejudice. One thing that many of the black and white romantic comedies of the 1930’s and 40’s share in common with Pride & Prejudice is all the back-and-forth verbal sparring between a heroine and hero who don’t seem to like each other very much—at least, not at first. But we know from the get-go that underneath all that tension there’s an incredible mental, emotional, and physical attraction.

That kind of push-pull attraction is something I like to incorporate in my own writing—a hero and heroine who can’t seem to resist each other, no matter how hard they try. In particular, I enjoy using dialogue to highlight that attraction. Why do I love a good back-and-forth interplay between the heroine and hero? Because to me, it signifies that they “get” each other, and that they see each other as equals. Let’s be honest, if you really don’t like someone, you aren’t going to stand around trading witty barbs with that person. So, often, what’s being said between the lines can be even more important than the actual (often sarcastic) words coming out of my characters’ mouths. Which is a good thing, because half the time my heroines and heroes can’t admit to themselves how they feel, let alone to each other. Without instant declarations of love and sentimentality, every word exchanged, every look, even, becomes that much more important.

One thing I like about dialogue-driven stories, be they books or movies, is the way the tone of the exchanges between the heroine and hero evolves as their attraction grows stronger. As the characters take tiny steps toward revealing their feelings, their dialogue and thoughts start to be less guarded and become more flirtatious. Banter between a heroine and hero is essentially foreplay—and the more heated the banter, the hotter I think the couple is going to be in bed when they finally get there. Therein lies the fun: we, as readers or viewers, get to watch as that attraction builds and builds, waiting for that moment when it’s going to rise to a boil and spill over uncontrollably.

And that fun—that excitement and anticipation, that enjoyment of reading a story that captures our imaginations and our hearts—is one of the many reasons that romance matters.

E-published authors I think you would like: Shannon Stacey and Ruthie Knox (*this links to Ruthie’s RARM content on her site. ~B) 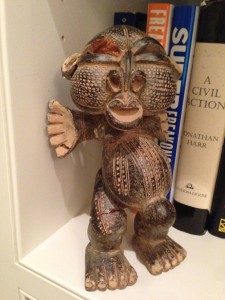 While on safari in South Africa, my husband and I bought a small statue from a village marketplace that we later learned is a “fertility idol.” A couple months later, the statue was broken during the move from our condo to our first house and—since we were thinking about starting a family—I (being superstitious) decided that having a broken idol was a bad omen. So I super-glued it back together.
Here’s a photo of our cute, but patched-up, African fertility guy:

Hmm… For my thirtieth birthday, I went to New York City with some girlfriends. My husband gave me a card before I left and told me to open it when I got to New York. Inside was a clue telling me where to go to find my gift—he sent me on a scavenger hunt in New York City to find it. Very sweet.

If you had to pick one romantic scene or couple to recommend to a first-time reader of your books, which would it be?

This is a tough question, but I’d probably pick a scene from Something About You, where the hero, Special Agent Jack Pallas, gives the heroine, Cameron Lynde, a ride home on his motorcycle. At this point in the book, the two of them have been trying to fight their attraction to each other, but when Cameron rides with Jack on the motorcycle, her mind starts going in . . . well, a naughty direction.  Here’s the excerpt

Julie is generously donating one autographed paperback OR e-book copy (Kindle/Nook/Kobo) of Love Irresistibly to one international reader AND one U.S. reader. International contest submissions enter here. To enter the domestic contest, either leave a comment here or enter the weekly drawing on the contest page. Or both.  (Only one entry per commenter per post, though – multiple comments on one essay does not give you more chances.)  Comment entries must be posted by midnight EST Aug 12 to be eligible, though winners will be announced the following week. 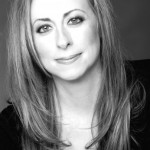 After graduating from law school, New York Times and USA Today bestselling author Julie James clerked for the United States Court of Appeals. She then practiced law with one of the nation’s largest firms for several years until she began writing screenplays. After Hollywood producers optioned two of her scripts, she decided to leave the practice of law to write full-time.

Julie’s books have been listed on the American Library Association’s Reading List for Top Genre Novels, Booklist‘s Top 10 Romances of the Year, and have been featured as one of Cosmopolitan magazine’s Red Hot Reads. Julie’s novels also were chosen as the Best Contemporary Romances of 2010, 2011, and 2012 in the All About Romance Readers’ Polls. Her books have been translated into fourteen languages and Julie’s sixth novel, LOVE IRRESISTIBLY, is now available.

Julie James lives with her husband and two children in Chicago, where she is currently working on her next book.

It was hard to tell over the motorcycle engine, but Cameron was almost certain she heard him chuckle. When they slowed down, she relaxed and loosened her grip around Jack’ waist. Without thinking, her right hand just sort of happened to graze along his stomach, and she felt his abdominal muscles tighten in response, ﬁrm and hard as a rock.

And that was pretty much the moment she started thinking about sex.

In her defense, to start things out, he was the hottest man she’d ever laid eyes on—and now her hands, too—and it certainly didn’t help that she was straddling him be­tween her legs. As they drove, nice and slow along the side streets, Cameron tried to pull her mind out of the gutter. But then they stopped at an intersection and she noticed how Jack’s hands worked the handlebar/clutch thingy as he revved the engine—almost like a caress—and she began imagining other things his hands could caress, strong hands that could lift her up, hold her down, ﬂip her over, pin her against a wall . . . and she realized then that her mind was already so far down in the gutter she’d need an extension ladder to get it out so she might as well just give in to the whole darn fantasy.

They were just getting to the good part in her head—in her mind she had revised the scene from the other day when Jack and Wilkins came by to tell her about the surveillance, only this time it was only her and Jack (no clue how he actually got inside her house, useless details) and this time she had just stepped out of the shower (with perfect makeup and hair, of course) and he was waiting in her bedroom (an act that would be stalker-ish in real life but was necessary to advance the storyline) and he said some sly bit about was she going to be a cooperative witness and she said something equally sly back (she hadn’t come up with the exact line yet but at this point the dialogue became superﬂuous) and then she dropped her towel to the ﬂoor and walked over and without saying anything else they tumbled onto the bed and—

Pulled in front of her house.

The motorcycle came to a stop, and Cameron blinked as she came back to reality. She sat there, needing a moment to regroup, trying to focus on the fact that the man she was with was Jack Pallas, who had only meant trouble for her in their brief, but bad, history together.

Noticing that she hadn’t moved, he turned around and ﬂipped open the visor of her helmet.

“You okay in there?”

Cameron snapped out of it. “Sure—I’m ﬁne.” She pulled off the helmet, handed it over to him, and even managed a nonchalant look. Or so she thought.

Jack looked at her closely. “Are you blushing?”

Cameron shrugged. “I don’t think so. Maybe there’s a little color on my cheeks from the wind.”

“You were wearing a helmet.”

She climbed off the bike as quickly as she could in her dress and heels. Jack had parked the motorcycle next to the curb, and the added inches made it easier for her to
get down. With an efﬁcient nod, she said her good-bye. “Thanks for the ride. Good night.” She turned and headed toward her front gate.

“Hold on—I need to check out your house.”

She stopped, having forgotten about that. “Well, let’s hurry up, then,” she said over her shoulder. She got to the gate and reached for the handle when his hand came down over hers.

Jack paused, as if seeing something he hadn’t expected. He took a step toward her. “Why are you looking at me like that?”

She tried to play it off. “Like what?” She opened the gate and backed toward the front steps.

Cameron put her hand on the stone ledge and slowly climbed up the stairs. “You’re imagining things.”

He shook his head slowly. “No.”

“I must’ve gotten worked up from my ﬁrst motorcycle ride,” she lied. And possibly from thinking about riding something else, too.

Jack clenched his jaw. “Christ, Cameron.” As he backed her toward the door, his expression was part angry, part . . . wow—something else entirely. “What the hell am I supposed to do when you look at me like that?”

“Ignore it. Stay focused on the fact that you hate me.”

He had her trapped against the door. Cameron wondered if he could hear the pounding of her heart, it was beating so fast.

Jack put his hand on her hip. Such a simple touch, but Cameron’s breath caught nevertheless. With her back pressed against the door, the only movement of her body came from her chest, her breathing short and quick in anticipation.

Jack’s gaze fell on her parted lips. He slid his other hand to her nape and tilted her head, pinning her with dark eyes so hot she felt the burn in her stomach.

She knew she could push him away if she wanted to.

She didn’t want to.

His gaze softened. “Cameron,” he said huskily, and she felt as though she melted right there.