Tell the Story Without Romance? I Dare You to Try.

Here’s a confession. And what would you have said? 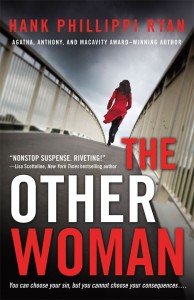 First you need to know I’m a TV reporter, have been for the last 35 years or so. So my entry into writing came with non-fiction. I could NOT make stuff up, I could not detour from the facts, I had to be absolutely objective. From the Challenger explosion to the Boston Marathon bombing, even with heart wrenching stories and life-changing events, my emotions could not come into play.

(Of course they did, eventually—when I’d go home and cry. But that’s another blog.)

AS I began my fiction career, wondered if my imagination would let me create new worlds where nothing existed before. Would I be able to come up with fresh new characters? Unique situations? Would I be able—for the first time since I was a little girl—to make stuff up?

And so, at my computer just outside Boston, I began to learn to let emotion in. Not just what happened, but how the participants felt about it. How their world changed them, and tormented them or when it made them deliriously happy. It allowed me to introduce a word that’s often not part of a hard news story—“love.”

And when that happened, it made me look at my news stories differently. Although I’d always been a story teller, adding fiction to my resume—in my books, mind you, not on TV!—opened new doors for how I thought about the world, and the people in my stories. Who did they love, why did they love, what were the stakes and what were the goals?

Being a reporter helped my fiction writing—but being an author also helped my journalism.

So now—the confession. Someone asked me once whether I could write a romance without a mystery.

I have to admit—I laughed. I said, well, I suppose. But what would the people DO?

I will pause now, while you laugh. This is why I write romantic suspense, I guess, rather that only romance.

But then the person followed up. Could you, she asked, write a mystery without romance?

And that was much easier. No way, I said, not if the characters are real people with real desires and real emotions. Even if you have a career-oriented down-the-line professional person, a corporate lawyer or brilliant surgeon or an FBI agent or a Marine—she’s always got romance in at least the back of her mind.

Right? Even if she’s thinking: “I don’t have time for this”–hmmm, what is she pondering that got her there?  If she’s twenty—she’s thinking—I have 80 years ahead of me! Am I going to spend it alone? If she’d thirty—she may be thinking:  I love my career—but what if I want o have children? Will I do that by myself? If she’s forty: she could be thinking—wow, I love my success—I wonder if there should be someone who I could share it with. If she’s  fifty, she might be thinking—well—you get the picture.

So it turns out, my realization is that romance is not “additional.” Romance-whether you call it love or not-love, lust or desire or longing or yearning– a crush or a passion or two ninety-year-olds holding hands—romance is all there is in our lives. And what brings us together.

Look for books published by Henery Press,  a brand new and completely fabulous publishing company doing top-notch cozy and edge-of cozy mysteries. One of their authors, Susan Boyer, won the Agatha for Best First Mystery! They are a terrific mix of romance and humor and suspense.

For an e-published author, NO question about this one—the incredible Rosemary Harris. Her brand new THE BITCHES OF BROOKLYN 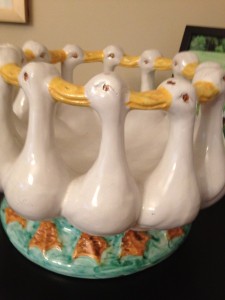 This duck bowl! We gave it to my father as a birthday present maybe 40 years ago—and he LOATHED it! He didn’t even pretend to like it! But I adore it, and have had it ever since.

THE JUGGLER. Because that’s all I do—juggled between my full-time job as an investigative reporter and a writer and a wife.  Who would play me? Candace Bergen.

A woman in the post office stopped me and said—are you Hank Phillippi Ryan? I’m used to being recognized from my years in TV, so I said, yes. She reached into her purse and pulled out a copy of THE OTHER WOMAN. I LOVE YOUR BOOKS! she said.  I almost burst into tears. Anytime someone loves my books—I am so endlessly delighted and grateful.  So, the gift of being able to tell a story, I guess…I am very lucky.

Well, Jane and Jake, who make their debut in the Mary Higgins Clark award winnings THE OTHER WOMAN.  I think of them as Katharine Hepburn and Spencer Tracy, you know? I love how they talk to each other, and I love how they yearn for each other. Theirs is a relationship that is prohibited by Jane’s job as a reporter—and Jake’s as a detective. Will they ever get together?  More to come in THE WRONG GIRL—this September.

Hank is generously donating three copies of The Other Woman for U.S. readers (apologies to international readers.) To enter, either leave a comment here or enter the weekly drawing on the contest page. Or both.  (Only one entry per commenter per post, though – multiple comments on one essay does not give you more chances.)  Comment entries must be posted by 11:59pm EST Aug 12 to be eligible, though winners will be announced the following week. 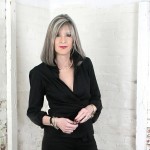 Hank Phillippi Ryan is on the air as investigative reporter at Boston’s NBC affiliate. Her work has resulted in new laws, people sent to prison, homes removed from foreclosure, and millions of dollars in restitution. Along with her 30 EMMYs, Hank’s won dozens of other journalism honors. The author of six crime fiction novels, she has won the Mary Higgins Clark Award and two Agathas, as well as the Anthony and Macavity Awards. Her book THE OTHER WOMAN was nominated for the Agatha, Anthony, Macavity, Daphne and Shamus. Her newest thriller is THE WRONG GIRL, which the Booklist starred review called “another winner.”  Hank is president of national Sisters in Crime and on the national board of MWA.