The Healing Power of Love & Romance

I’d love to tell you today why I believe romance matters, but I’d rather let my readers do the talking.

Romance matters because a young woman in Portugal named Lourdes Goulart was praying that my next book would come out before the cancer that was ravaging her body claimed her life. Even though chemo had weakened her eyesight to the point of blindness, she sent me a beautiful and painstaking cross-stitch she’d done of a windmill she could see through the window from her bed. I received word shortly after her package arrived that Lourdes had died. She started my new book the day before she entered the hospital for the last time, but didn’t want to read past the first page for fear of being interrupted.

Romance matters because a little girl named Kim could never seem to master reading. Both her performance in school and her self-esteem plummeted. When she was eleven years old, she ended up in bed with the chicken pox for two weeks and her father brought her a stack of Harlequin romances to keep her occupied. Because Kim was so interested in those books, she literally taught herself to read and went on to excel both in school and in life. She now lives in a house surrounded by her beloved books.

Romance matters because I recently received a call from a friend who had attended nursing school with me. She’d just undergone a total hysterectomy. She described how depressed and emotionally empty she’d felt after the surgery. She told me that reading my book CHARMING THE PRINCE pulled out of her depression and even restored the sexual desire for her husband that she had feared she would never feel again.

Romance matters because of an e-mail I received from a 54-year-old incest survivor. Instead of blaming her father for the terrible things he had done to her, she had always blamed her mother for not protecting her. Because my hero in A KISS TO REMEMBER found the grace in his soul to forgive his mother for not protecting him, this woman decided, after nursing her bitterness for fifty years, to forgive her Alzheimer’s stricken mother before she died.

Romance matters because there’s enough heartbreak in this life and when your own heart is aching, there’s nothing more uplifting than to read about hearts being healed by the power of love.

So what is the most “healing” romance YOU’VE ever read?

Rebecca Hagan Lee’s GOLDEN CHANCES. I’ve been missing wonderful Americana historical romances for so long and this is the first in her “Borrowed Bride” series set in a small town in Wyoming.

What is the craziest or ugliest object in your house and why do you keep it? 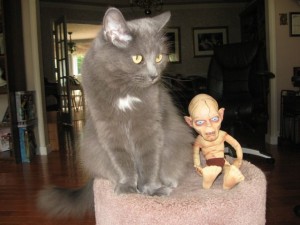 Christina Dodd sent me a Gollum doll with a pull string so it actually hisses, “My precioussss…” when you pull the string. Every time I look at it, I naturally think of Christina. (The physical resemblance is stunning! ;)) Oh, and it freaks out my husband and cats, which is fun.

I’M DANCING EVEN FASTER THAN I CAN starring “A Younger Meg Ryan Back When She Could Look Fabulous Without Combing Her Hair” (with Melissa McCarthy as her understudy).

My dad gave me the pearls he brought my mom back from Vietnam. I always feel like she’s with me when I wear them.

I love the scene in THE TEMPTATION OF YOUR TOUCH when Max goes ghost-chasing and ends up with his prim and proper housekeeper in his arms instead of the ghost.

And if you want a fabulous intro to the romance genre in general, pick up one of Judith McNaught’s classic historicals like SOMETHING WONDERFUL or ALMOST HEAVEN.

Teresa is generously donating at $25 Amazon gift card to one lucky winner. No international sorry. To enter the domestic contest, either leave a comment here or enter the weekly drawing on the contest page. Or both.  (Only one entry per commenter per post, though – multiple comments on one essay does not give you more chances.)  Comment entries must be posted by 11:59pm EST Aug 15 to be eligible, though winners will be announced the following week. 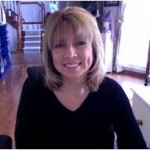 After failing at her lifelong ambitions to become a princess or a secret agent, Teresa wrote her first novel at the age of twenty-one, introducing readers to one of the most beloved and versatile voices in romance and women’s fiction. (Yes, she wrote that part.) She has appeared on every national bestseller list, including the New York Times, USA Today and Publishers Weekly lists. She currently has over ten million books in print and is published in over seventeen languages. (But alas, never in Klingon!) She is currently being held as a slave in her own home (while wearing a gold bikini) by her cats Willow Tum-Tum and Buffy the Mouse Slayer and recently started her own publishing company Amber House Books. You can visit her website at www.teresamedeiros.com