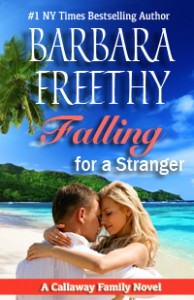 While many people believe that the heart of a romance novel is an extraordinary love story, I also believe that the heart of a good romantic story is hope. Readers are often moved and even changed by reading romance novels. Something in the story resonates with what’s happening in their life, or what they want to be happening in their life. The love story gives them hope that they, too, can have that magical, wonderful, amazing story, that it doesn’t just exist on paper but also quite possibly in their own lives.

A woman wrote to me after reading my novel DANIEL’S GIFT and told me that after she finished the story, she decided to end her engagement. She said that while reading Jenny’s thoughts about settling for a man who would make a good father and a good husband but not necessarily be a life-changing love, this reader decided she was about to make the same decision, and she wanted more. My story had given her the “hope” that something else existed for her. At first, I was a little worried that she was letting a piece of fiction impact her life too much. But two years later, she wrote me again to tell me that she was engaged, and this time she knew in her heart it was absolutely the right man. So she got her own happily ever after!

I don’t believe that women, or even men, believe that romantic love stories that exist in our books happen every day, but I think writers show what’s possible, and make readers want to reach higher, dig deeper, get more for themselves, which brings us back to that feeling of “hope”. 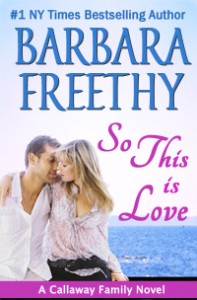 One of my books, ONE TRUE LOVE, is about a couple who experienced a terrible tragedy and split apart. They come back together years later with another chance at love, but taking that chance will mean exposing all the pain that they’ve buried away and being vulnerable again. After reading this story, a reader told me that she’d had a similar experience with her husband, and after reading my book, she’d decided to have a long overdue conversation and maybe they would have their second chance.

Not all books are so transformative or emotional. Some love stories are just for fun or for thrills or for the imagination. My most recent novel, FALLING FOR A STRANGER, which is the third book in my Callaway Series, starts with an ex-Navy pilot visiting a beach side bar on a tropical night. Drew meets a beautiful and somewhat mysterious blonde whose secrets will change his life forever. This book is fun, sexy, mysterious, but I think it also explores the deeper themes of trust and honesty. Which brings me back to the idea that love stories are not always just about romance but about how love changes people.

Readers of romance novels find joy, fun, adventure, thrills, and transformation within the pages of our books, and without romance novels, the world would be a little darker and heavier.

I have many favorite authors in romance. In the contemporary world, I really enjoy books by Christie Ridgway, Barbara Samuel and Carol Grace.

This is a tough question since I just cleaned my house out! But one of the craziest items I had was a three-foot stone figure of a jockey that I inherited from my parents. They used to race thoroughbreds and someone had given them a copy of the jockey who had sat their favorite horse. Sadly, to say, he’s moved on to someone else’s house now.

Her wild, wild imagination… I have no idea. I think I’d love to be played by Sandra Bullock or Reese Witherspoon. Someone who is down to earth with some humor to them!

I think those would have to be cards from my kids. In my recent spring cleaning, I discovered a note from my daughter when she was about five years old. That meant a lot to me.

I think first time readers would love Drew and Ria in FALLING FOR A STRANGER. And they would probably also love Julia and Alex from DON’T SAY A WORD.

Barbara is generously donating two copies of   FALLING FOR A STRANGER – winner’s choice of print or ebook – to a U.S. reader.  And two ebooks of  FALLING FOR A STRANGER to an International reader (International readers enter here). U.S. readers, to enter, either leave a comment here or enter the weekly drawing on the contest page. Or both.  (Only one entry per commenter per post, though – multiple comments on one essay does not give you more chances.)  Comment entries must be posted by 11:59pm EST Aug 16 to be eligible, though winners will be announced the following week.

Barbara Freethy is a #1 NY Times Bestselling Author and has published 35 novels ranging from contemporary romance to romantic suspense and women’s fiction. Traditionally published for many years, Barbara began self publishing in January of 2011 and in two years has sold over 3 million books and has put ten of her titles on the New York Times and USA Today Bestseller Lists. You can learn more about Barbara at www.barbarafreethy.com