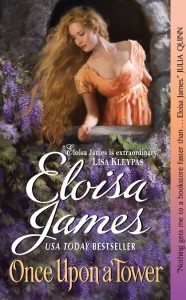 Why does “romance” as a genre matter?  It’s a complicated question, that goes beyond the mere fact of entertainment.  Joy matters, and I feel joy after reading a good romance.  But a more complicated answer is that romance has a rhythm and a promise to it that appeals to me.  I know the world is a tough and cold place; I’ve lost my mother and I have a child with a chronic illness.  But—and this is a big but—I also know that love and joy make all the difference.  Romance reminds me that if there’s a pattern to the universe, it’s one shaped around and by love.  We can all use that reminder now and then.

If you love historical romance, I’d suggest that you give Juliana Gray a try. (*Juliana’s posting today, too! ~Bobbi)  She’s a brand new author, who just published her 4th historical.  I’ve found her romances to be super smart and yet—most importantly—she understands that a great romance doesn’t just craft beautiful sentences.  It has to go to the heart.  Hers do.  Also, I was recently introduced by a reader to a wonderfully ditzy, fun heroine in a book called SEA CHANGE, by Darlene Marshall, an e-published author worth exploring. Sea Change is original, fun, and a bit eccentric – I definitely recommend it! (*And Darlene provided R-A-R M content on her site, too – find it here.~ B)

Questions for the Author 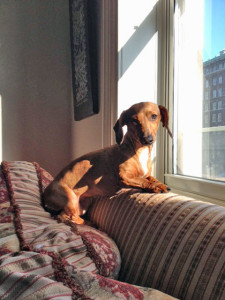 Our rescue dog, Lucy, is not beautiful.  She’s a mini-dachshund, but with some other things somewhere in her ancestry, so her legs are a bit too long.  And during her former life on the streets, someone took off part of one eyelid, and nibbled on her tail.  We keep her because she is the happiest, most joyful, and most lovely object in our house.  Though she’s not really an object, but a gift.

Leaving out Lucy (see above), my husband and children… I love a simple birthday card that my husband gave me, when we were first married and had no children and no money.  Now he comes home with presents – which are wonderful —back then, we really only had words.

I’d say that When Beauty Tamed the Beast is a crowd-pleaser.  Many people love the fairy story, but others greatly enjoy the fact that the hero, Piers, was inspired by Dr. House.

Eloisa James is  generously donating five copies of The Ugly Duchess  to give away, and 20 copies of her fairy tale sampler.  U.S. only, apologies to international readers.  To enter, either leave a comment here or enter the weekly drawing on the contest page. Or both.  (Only one entry per commenter per post, though – multiple comments on one essay does not give you more chances.)  Comment entries must be posted by midnight EST Aug 3 to be eligible, though winners will be announced the following week.

New York Times bestselling author Eloisa James writes historical romances for HarperCollins Publishers. Her novels have been published to great acclaim. A reviewer from USA Today wrote of Eloisa’s very first book that she “found herself devouring the book like a dieter with a Hershey bar”; later People Magazine raved that “romance writing does not get much better than this.” Her novels have repeatedly received starred reviews from Publishers’ Weekly and Library Journal and regularly appear on the best-seller lists.

After graduating from Harvard University, Eloisa got an M.Phil. from Oxford University, a Ph.D. from Yale and eventually became a Shakespeare professor, publishing an academic book with Oxford University Press. Currently she is an associate professor and head of the Creative Writing program at Fordham University in New York City. Her “double life” is a source of fascination to the media and her readers. In her professorial guise, she’s written a New York Times op-ed defending romance, as well as articles published everywhere from women’s magazines such as More to writers’ journals such as the Romance Writers’ Report.