— According to special research from the British Medical Journal, the more orgasms you have, the longer you’re likely to live.

Recently I got one of those emails filled with wisdom on how to live a good life, and since I’m always looking for wisdom, no matter how shady the source, I was reading along and nodding at bromides like, “Don’t let the sun go down on your anger,” and “Your beliefs don’t make you a better person, your behavior does.” Then I saw one solemnly given piece of advice that made my hair stand on end. It stated, “Always read stuff that will make you look good if you die in the middle of it.”

I … what? Was this a joke? No one could seriously consider picking their books according to whether some unnamed, unknown person would judge them after death. Could they?

Yesterday I was scanning Twitter, looking for deep and meaningful discourse among my peers … all right, fine. I was on Twitter, screwing around, when I saw a series of indignant tweets whip past.

It appears that, once again, someone posted a blanket, “Romance is stupid,” article, causing outrage among readers, reviewers and writers.

It’s become an internet standard that if a psychologist/book columnist/writer of “more important” fiction, wants attention, s/he posts a “Romance is stupid” article. Frankly, the organ that creates my outrage is exhausted. I can’t get excited (again), when someone I don’t know, don’t care about, will never hear of again, bashes my genre.

Early in my career, I realized how silly the whole romance novel debate was when I was in a bookstore autographing THE GREATEST LOVER IN ALL ENGLAND. Some guy came up and picked it up, and said, “I’d buy one for my wife, but she might think that’s what real life is supposed to be like.”

I was … without words.

As you know, doesn’t often happen.

Can you imagine a woman, any woman, walking up to Tom Clancy and saying, “I’d buy a copy of HUNT FOR RED OCTOBER for my husband, but he might imagine he was a submarine captain”?

There is no way to fight willful ignorance and prejudice, so it’s all going to come down to … do you care what other people think of your reading choices?

Let me tell you a true story.

One night, Truman Capote was in a New York restaurant when a female admirer came across to his table, gushed about his work and begged for an autograph. Her very drunk husband objected, staggered over, unzipped his fly, pulled out his penis and said, “Sign this.” Capote inspected it, then said, “I don’t know if I can sign it. Maybe I could initial it.”

Truman Capote was one of the great writers of the twentieth century. He wrote BREAKFAST AT TIFFANYS and IN COLD BLOOD. Over twenty films and TV movies were filmed from his books and stories, and an Academy Award winning movie was made of his life.

If Truman Capote couldn’t always get respect, then obviously, in the modern world, fiction primarily written for women by women that features politically incorrect female sexual fantasies, is not going to win respect.

So it’s time for us romance readers and writers to pull up our big girl panties and stop arguing with the willfully ignorant, and stop worrying about whether we are respected. 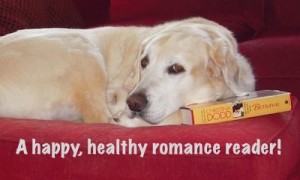 Instead, let’s all kick back and enjoy our reading. Because remember the studies I quoted at the beginning?

— According to special research from the British Medical Journal, the more orgasms you have, the longer you’re likely to live.

Assuming those studies are true, we don’t need to “read stuff that will make you look good if you die in the middle of it.” We romance readers are going to outlive all the critics anyway.

Christina chose to answer just one question, but the answer is so cool, I can’t quibble or complain! ;o) – Bobbi 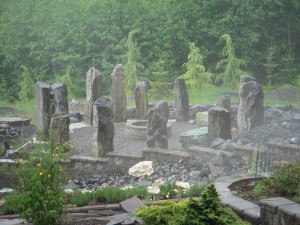 Technically, it’s not in the house. It’s beside the house. One day I was looking out of our bedroom window at the open land (we’re on five and a half acres, cut out of the forest) and I said to my husband, “I know it’s weird, but I loved Stonehenge and I’d love to have my own stone circle.” Much to my surprise, he jumped on the idea. I pictured something with stones about knee-high. But he’s a guy, he loves big machinery, and he designed and built a STONE CIRCLE, with the largest stone about nine feet tall and weighing 5300 pounds. You can read all about it and see more photos here on my website. My husband did, by the way, tell me we aren’t weird; we’re eccentric and free-spirited. That’s our story, and we’re sticking to it.

To enter, either leave a comment here or enter the weekly drawing on the contest page. Or both.  (Only one entry per commenter per post, though – multiple comments on one essay does not give you more chances.)  Comment entries must be posted by midnight EST Aug 8 to be eligible, though winners will be announced the following week.

New York Times bestselling author Christina Dodd builds worlds filled with romance and adventure and creates the most distinctive characters in fiction today. Her fifty novels — paranormals, historicals and romantic suspense — have been translated into twenty-five languages, featured by Doubleday Book Club, recorded on Books on Tape for the Blind, won Romance Writers of America’s prestigious Golden Heart and RITA Awards and been called the year’s best by Library Journal. Dodd herself has been a clue in the Los Angeles Times crossword puzzle — her mother was totally impressed. Publishers Weekly praises Christina’s style that “showcases Dodd’s easy, addictive charm and steamy storytelling.” With more than fifteen million of her books in print, her legions of fans always know that when they pick up a Christina Dodd book, they know they’ve found a story “For the wild at heart!”