A quick note from Bobbi and Read-A-Romance Month

* For those of you wondering why Laurin Willig is not here today, the short answer is because she recently had a baby – yay, Laurin! – and we decided to move the deadline back so she could participate when she was ready. She will be posting on the 17th which was originally Barbara’s post date. (Many thanks to Barbara O’Neal who graciously stepped in at the last minute to help out!)

The Left Bank of Women Writers

One of the reasons romance matters is because of the way it transforms the writers who create the genre.  Just think of it! How many women writers are engaged in lives that are bigger, wider, deeper, happier than any life they could have imagined—because they write romances?

Ages ago, there was a group of romance writers on the Genie Romance Exchange.  We called it RomEx, and it was a hideously difficult place to get to because it was an old DOS-based system, so it was a very smart group who gathered there (or else we had smart children, like me, to help us). It was the early 90s.  Most of us were just getting our careers off the ground, and a handful had been published well, or were about to be. 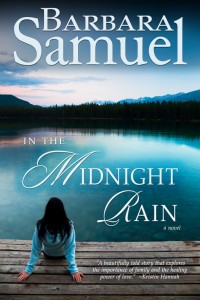 Some of those women have become giant stars and I would tell you their names, but the point is that we gathered there, all of us, to talk about writing, day after day after day.  We came from many walks of life, from hard scrabble working class to well traveled Ivy Leaguers. We talked about husbands and children and health and everything in between, but mostly we talked about writing and books, and specifically about romance novels.  We believed in them, we still do.  At the time, we said we were the Left Bank of women writers, forging the way for women writers who would come behind us.  It sounds a little grandiose now, maybe.

But think about it.  How many romance writers found their lives through this genre? How many more women are writing now, telling their stories their own way, than ever have before?  The number is impossible and thrilling to calculate.  I am a writer because there are romance novels—I didn’t want to tell the other kinds of stories open to me. I wanted to write about women winning, finding their lives and loves and conquering all, and I found those stories in romances.

If the world thinks they are silly tales, they just don’t understand them.  In the meantime, we’re still engaged in the conversation, keeping each other company on lonely evenings or when we’re tired, telling each other stories of good men, and bad men, and the thing that happened to this woman I know…..

In general, I’ve been reading Colleen Hoover and loving her.  SLAMMED is such a great novel.   And you can’t beat Laura Kinsale. She’s the best romance writer who has ever picked up a pen.  In contemporaries, I love Christie Ridgway.

Romance writer readers might not know about, MJ Scott, who writes paranormal urban fantasy, but also has contemporary romances coming out under her own name Melanie Scott.

A Virgin of Guadalupe statue that lights up with laser lights. It’s about two feet tall and she’s draped with mementos from my travels.  My young teen son brought her to me one Easter morning, so very proud of himself, and she’s had a place of honor in my office ever since.

The Road is Made by Walking.  Lauren Becall in her prime.

My partner, Neal.  He was an absolute surprise and so incredibly right for me that ten years later I’m still delighted and astonished.

It’s so hard to choose! I love the balance between sexy bad boy Blue and sensible Ellie in In The Midnight Rain, but I love them all, honestly.  One of my favorite scenes is the end of The Lost Recipe for Happiness.  I cried like crazy writing it.

Barbara is generously donating three copies of In The Midnight Rain and three copies of The Lost Recipe of Happiness to give away . To enter the domestic contest, either leave a comment here or enter the weekly drawing on the contest page. Or both.  (Only one entry per commenter per post, though – multiple comments on one essay does not give you more chances.)  Comment entries must be posted by midnight EST Aug 9 to be eligible, though winners will be announced the following week.

arbara Samuel O’Neal is the author of a number of highly acclaimed novels, including the Target Club Pick How to Bake a Perfect Life and The Lost Recipe for Happiness, both of which won RITA awards, and placed her in the Romance Writers of America Hall of Fame. She sold her first novel in her twenties, and has also published under the names Barbara Samuel and Ruth Wind, and her books have been sold in Poland, Italy, Australia, New Zealand, France, Germany, Spain, Brazil and Turkey. Barbara loves olive oil, peaches, good ale, gardening, and all big dogs. She’s also a long distance walker who traveled a portion of the Camino de Santiago de Compostela in 2010, and hopes to return to walk the rest in the near future. A native of Colorado, she now lives on the skirts of Pikes Peak with her partner, a British endurance athlete, and four animals who convinced her they needed rescue.

Buy Barbara’s and other books on Amazon