Part of writing romance means finding inspiration everywhere. In April of 2013, we went to Paris for the 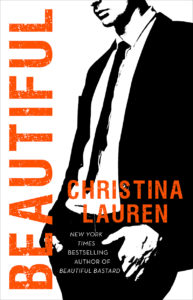 French release of our first book Beautiful Bastard. It was a bit of a whirlwind; Christina had never traveled internationally before, so this was the first stamp in her passport, it was also our first real trip as a coauthor team and our first real taste of interviews and the media push that can surround a book launch.

On our last day and during a tiny pocket of free time, we ventured into the city together. We were ecstatic, thrilled just to be in Paris, let alone to see our book in French shops and adverts lining the sidewalks, and after a visit to Ladurée for way too many macarons, we turned down Rue Saint-Honoré in search of a small present for each other to celebrate. We still don’t know why—in the middle of Paris and surrounded by dozens of beautiful shops—we decided to step into an American Michael Kors, but fate works in mysterious ways. Inside we picked out a little something, and were helped by a beautiful woman from Southern California. When we asked her how she had ended up in Paris, she said that she’d married a Frenchman, and when he needed to come back to Paris, she’d decided to take the leap and move with him.

After learning we were writers, she looked at us both and whispered, “There’s a book in there, I think.”

She was right. Our minds went into overdrive, and that night we sat in a coffee shop—exhausted and 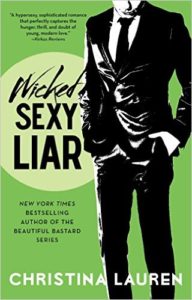 fighting sleep—while we plotted out what would eventually become one of our favorite and most well received books, Sweet Filthy Boy.

This is just an example of why we love romance. Love is everywhere; you just have to be open enough to see it.

Damen is a warrior hero to his people, and the truthful heir to the throne of Akielos, but when his half brother seizes power, Damen is captured, stripped of his identity and sent to serve the prince of an enemy nation as a pleasure slave.

Beautiful, manipulative and deadly, his new master Prince Laurent epitomizes the worst of the court at Vere. But in the lethal political web of the Veretian court, nothing is as it seems, and when Damen finds himself caught up in a play for the throne, he must work together with Laurent to survive and save his country.

For Damen, there is just one rule: never, ever reveal his true identity. Because the one man Damen needs is the one man who has more reason to hate him than anyone else.

A Court of Thorns and Roses by Sarah J. Maas – sarahjmaas.com – (at Amazon)

When nineteen-year-old huntress Feyre kills a wolf in the woods, a beast-like creature arrives to demand retribution for it. Dragged to a treacherous magical land she only knows about from legends, Feyre discovers that her captor is not an animal, but Tamlin–one of the lethal, immortal faeries who once ruled their world.

Loud is How I Love You by Mercy Brown – www.mercybrownwrites.com – (at Amazon) 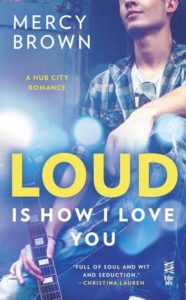 scene will be no easy task. She definitely knows better than to break the number one rule of the band: Don’t sleep with your bandmates! But after she ends up having the best sex of her life with her guitarist, Travis, she finds following that rule is a lot harder than it sounds.

When the band gets the gig of their dreams, making it big seems just within reach. But Emmy’s inability to keep her hands off Travis threatens everything they’ve worked for. Can Emmy find a way to break the rules and not blow the chance of a lifetime?

Anything by Kresley Cole – kresleycole.com – (at Amazon)

(Kresley Cole will be closing out Read-A-Romance Month on Aug 31. Be sure to stop by!)

In August of 2014 we were lucky enough to be invited to Brazil, and found it to be home to some of the 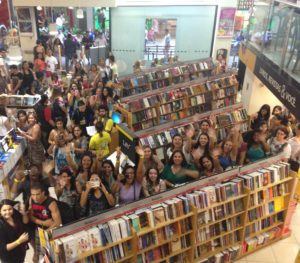 most loving and passionate people we’ve ever met. Hundreds of people waited to see us, and the passion and excitement they felt for the books and characters they love was palpable. That trip changed our lives.

The answer to this, of course, would be each other. As coauthors we always joke that we basically have children together. We come up with these ideas and then—just like parents—put in a lot of hard work and tears, and finally sit back and watch them go off into the world and become their own thing.

Lo’s favorite city in the world is Paris, and I’m sure nobody can deny that there’s a feeling you get while there, like emotion is bursting out of you. 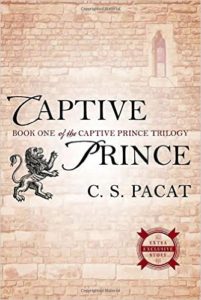 trilogy. These books murdered us in the best possible way. Laurent is cold and brilliant, and getting to sit back and watch as Damen slowly chips away at that cold exterior was one of the most fun reading experiences we’ve had in a long time. You watch respect build across the three books and realize that while Laurent is a genius at almost everything he does, Damen has to be equally as smart in his own way to hold his own. It’s a slow, smoldering burn within a world so rich and well written you feel like you’ve been dropped in the middle of it.

We are old married ladies, so this answer has two versions. The boring/realistic one: Home in jammies with a glass of wine and snuggles while watching an episode of one of our favorite shows. And the exciting one: A night dressed up, out to dinner and maybe a concert or show. We recently saw Hamilton and would love to take our husbands.

Christina Lauren is generously giving away two complete sets of the Wild Seasons series (Sweet Filthy Boy, Wicked Sexy Liar, Dark Wild Night, Dirty Rowdy Thing) paperbacks – one for US readers and one to international readers. To enter the giveaway, leave a comment below or on the *Facebook post you’ll find here (or both – Share the Love!) ;o) by 11:59 pm PST Aug 7, 2016.***International friends, be sure to include your country in your comment so we know to include you in the international drawing.  Good luck! 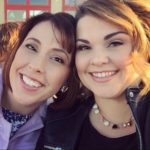 Christina Lauren is the combined pen name of long-time writing partners/besties/soulmates/brain-twins Christina Hobbs and Lauren Billings. The coauthor duo writes both Young Adult and Adult Fiction, and together has produced thirteen New York Times bestselling novels. They are published in over 31 languages, have received starred reviews from Kirkus, been selected as one of NPR’s Top 100 Swoon-Worthy Romances, and won both the Seal of Excellence award and Book of the Year from RT Magazine.

*Please note that the Amazon button, most cover images and many text links connect to an affiliate portal that supports Read-A-Romance Month. Thanks so much for your help and support!