Day 10 – The The Mysterious Mr. Quin by Agatha Christie 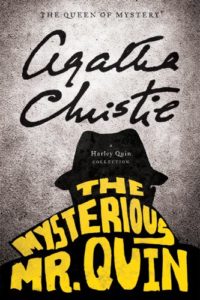 Of course everyone’s heard of Hercule Poirot and Miss Marple, but have you ever read the short stories that feature Harley Quin?

They’re my favorites of all Agatha Christie’s characters (though I really like Tuppence and Tommy too, another lesser known set that I tend to like more than the usual – possibly because romance is more overt in them.)

According to Wikipedia, (though skip the plot overviews, because there may be spoilers!) “Each chapter or story involves a separate mystery that is solved through the interaction between the characters of Mr Satterthwaite, a socialite, and the eponymous Mr Quin who appears almost magically at the most opportune moments and disappears just as mysteriously. Satterthwaite is a small, observant man who is able to wrap up each mystery through the careful prodding and apposite questions of Quin, who serves as a catalyst each time the men meet.”

I first read these one summer when I was in a car on a trip and I didn’t have anything else to read. (I think it was right before I turned 13.) I wound up barely wanting to put the book down.

from the back cover: 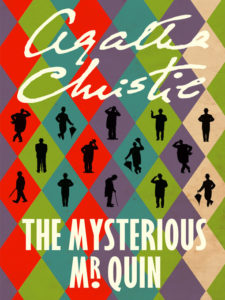 collection of short stories centered around the enigmatic Harley Quin, whose unpredictable comings and goings are usually a good indication that something is about to happen…and rarely for the best.

It had been a typical New Year’s Eve party. But as midnight approaches, Mr. Satterthwaite—a keen observer of human nature—senses that the real drama of the evening is yet to unfold. And so it proves when a mysterious stranger knocks on the door. Who is this Mr. Quin?

Mr. Satterthwaite’s new friend is an enigma. He seems to appear and disappear almost like a trick of the light. In fact, the only consistent thing about him is that his presence is always an omen—sometimes good, but sometimes deadly. . . .

If you’re an Agatha Christie fan, and you haven’t discovered these, then you’re in for a treat.

If you’re not an Agatha Christie fan, then give them a try. You’ll probably like them significantly more than the average AC story, since romance is always part of the plot.

I also want to take a minute and say that AC herself had a kind of interesting life, and it might be worth a minute or two to skim her story on Wikipedia too. (It’s here.)

If you’ve never read them, give Tommy & Tuppence Beresford a chance. They too have a collection of short stories, PARTNERS IN CRIME: A Tommy & Tuppence Adventure, though they first appeared in AC’s second published novel, THE SECRET ADVERSARY. One of the fun things about AC’s prolific career is that she aged her detectives in real time. Tommy & Tuppence appear in the last novel AC wrote, POSTERN OF FATE – as elderly detectives retiring to a country estate.

I read a blog post once that said it was a great idea to read all of her titles in chronological order, which sounds fun though overwhelming. In the end she wrote 66 detective novels and 14 short story collections.