A quick word from Bobbi Dumas, your host.

Hi everyone! Welcome to Read-A-Romance Month. You can find out more about this fun, month long event here. And check out all the great authors taking part this year on the calendar, here.

The theme this year is The Romance Of Reading, The Magic Of Books and we have an awesome assortment of writers – both romance and mainstream fiction authors – sharing about books, reading, romance & magic. I hope you’ll visit everyday.

(Also, be sure to check in to The Romance Of Reading FB page, where one of the RARM authors will be hosting the page each day in August. Today Karen Hawkins will also be on the page.)

As a historical romance author, I spend my writing time contemplating story ideas, research tidbits, and formulating character motivations. I don’t often think about magic…aside from the many times I wish dinner magically appeared on the table every night. But once I contemplated the idea of magic for a time, I realized my Once Upon A Scandal series contained more bewitching elements than I had originally known.

Declan, the new Duke of Darington and the hero of To Love A Scandalous Duke, has experienced heartbreak, betrayal, and as the bi-racial second son of a British duke, his share of discrimination. Yet he’s determined to take his place in society, no matter the stares, whispers, and past scandal that haunt his steps.

Lady Alethea Swinton has smiled, danced, and showcased perfect manners all in an attempt to be the perfect debutant in her father’s estimation. And when Declan and Alethea reunite after many long years of being apart, their HEA is not certain. So many obstacles stand between them, from his scandalous family history, her father’s fierce rejections, and even the dark cloud of murder that threatens to poison their relationship, yet they manage to overcome the betrayal and heartache to secure a happy future together.

In To Resist A Scandalous Rogue, Charlotte Taylor is in a desperate state the night she meets Finlay, the infamous rogue Lord Firthwell, in the darkened gardens of a house party. She knows he could solve the majority of her problems, yet she flees into the light of the morning instead of surrendering to her weakened resolve.

But when Finlay and Charlotte encounter each other a year later, their circumstances are drastically different. Charlotte is a respectable teacher at a foundling home, and Finlay is standing for a contested Parliamentary seat. They should avoid each other, both painfully aware that a relationship between an earl’s heir and a Jewish widow is unsustainable. Yet, love and attraction push them past their fears and trepidation to form a lasting attachment. It takes clever maneuvering…and a bit of magic to ensure Finlay and Charlotte find their way into each other’s arms permanently.

At this point, I’m sure you’re wondering when I’ll get to the real magic. The kind of magic that births dragons, allows a man to change his face, and raises the dead. But here’s the thing: at its core, rebellion in the name of love is infused with a bit of magic. Love is magical…as well as painful and messy. It may not stop world wars, influence elections, or halt thieves and murderers in their tracks, but then it’s not supposed to. In its truest form, love is meant to bring men and women together in lasting bonds, whether familial or otherwise, and to create communities. Communities in which each individual contributes their fair share and invests in ensuring the future is promising. The magic I write about unites families, forgives sin, and yokes lovers together individuals, despite their faults and foibles. So, while I may not tell stories featuring witches and sorcerers, the simple act of loving is a rebellious act of magic unto itself.

Elizabeth writes witty, smart Regencies with fierce, clever heroines and heroes who love them for it.

If emotional and vivid Regencies that leave you swooning are your jam, you will not be disappointed by a Susanna Craig book.

Minerva’s historical romances are lush and exciting, with whip smart heroines and dashing heroes endeavoring to win them.

Tell us about a time in your life that felt magical to you.

During a recent family caravan road trip, we found ourselves winding along a two lane highway in Colorado, snow-capped mountains soaring above us. In every direction we looked were pristine vistas, rolling valleys, and even the occasional glimpse of local wildlife. It made me emotional to be surrounded by such beauty. It was truly a magical drive.

Tell us about a book that was magical for you.

When I first cracked open Sarah MacLean’s No Good Duke Goes Unpunished, I was a stay at home mom to a colicky three month old, an energetic two year old, and battling postpartum depression. Romance novels had become my escape from the stress and exhaustion that seemed to go hand in hand with that time. But when I reached that surprise twist at the end of the book, I was suddenly inspired. And my husband fanned my excitement, an emotion I had not felt in months, by encouraging me to write my own romance. I’m certain I would have found my way to writing eventually, but No Good Duke Goes Unpunished will always hold a special place in my heart for kindling the fire that helped bring me out of that dark time.

Tell us about a “magical moment” in your writing or your career?

Finding readers – my readers – as a new author is sometimes a stressful journey. Getting my book noticed and into the right readers hands is a challenge, and I had become discouraged. And then I received a message from a friend that Eloisa James had recommended To Love A Scandalous Duke in an article for BookRiot. I was floored! That simple shoutout was the shot of encouragement I needed to rekindle the magic to keep pushing forward.

For writers who use magical aspects in their books, what attracts you to those elements? For those of you who don’t, are there specific themes or elements you’re attracted to and find yourself going back to? Why do these resonate with you?

In every book I have written so far, my characters are striving to overcome society’s standards and obstacles to create lives for themselves based on their own terms. Whether it’s Lady Alethea Swinton defying her father to be with her childhood friend, Declan, in To Love A Scandalous Duke, or Charlotte Taylor from To Resist A Scandalous Rogue who finally confronts her horrid former in-laws so her future could be free of their manipulation, each of my protagonists takes risks or pushes back against society to win their HEAs.

Creativity is a kind of magical experience. What inspires you, keeps you going, helps you when you lose focus, etc.?

Inspiration for my stories come from a multitude of sources. As a busy mom, my days are filled with homework and therapy appointments and the baby shark song, but even then snippets of dialogue can come to me at a traffic light. I stumbled across a picture of David Gandy on Pinterest that inspired an entire book! The idea for my current WIP came to me after listening to a podcast about the mythical yeti! Whenever inspiration strikes, I record the idea and any additional details in my phone because motherhood has fried my brain and I would never remember!

Drawing – Liana is generously giving away a signed copy of her newest release, TO RESIST A SCANDALOUS ROGUE. U.S. winner only, apologies to our international friends.
To enter, leave a comment below responding to an element of Liana’s post. Open until August 15, 2019 11:59 PM EST.

Liana De la Rosa is a historical romance writer whose stories are set in the Late Regency and Victorian periods. Her Once Upon A Scandal series is published by Entangled Publishing’s Amara Imprint. Liana has an English degree from the University of Arizona and enjoys cheering on her alma mater in all things. When she’s not writing witty heroes, saucy heroines, and secondary characters screaming for their own stories, she’s a wannabe domestic goddess and fashionista who wrangles her rambunctious brood of small children with her patient husband in Arizona.

Discover all of Liana’s books: 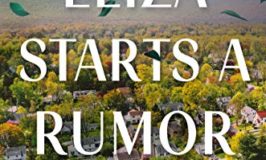